I DON'T want to live in a world where the dog with the loudest bark runs the pack!

So says Helen, the lone green voice on the Australia Day Committee of Coriole Shire.

And that probably sums up the serious message that our first play for 2018 hilariously leads us to.

There are many more layers in Australia Day than a superficial viewing suggests. You may have seen much of Jonathan Biggins’ witty satire of Australia in the past, especially in The Wharf Review, but with this play he shows he can look at his country with compassion as well as humour.

Biggins hopes that audiences will see beneath the surface of his characters, to understand that nobody is as one-dimensional as we think, and that, for example, can the xenophobic Wally and Greenie Helen find common ground?

At another layer he asks us who really owns humour?

"What, you can't believe I might be racist because I'm from a different race? How racist is that?" asks Chester.

And when is “doing a job for a mate” appropriate? Does it work in politics?

Australia Day's strength is serving up the questions in a way that makes the discussion about our identity far more palatable.

The play is about six members of the organising committee hashing out the finer details of the big day while butting heads over politics, patriotism and progress.

It's up to date, funny and finger on the pulse. Consternation about a development application, agony over what might best reflect multicultural Australia and riffs on political party dynamics.

And other hot button topics such as immigration, globalisation, disabilities, environmentalism and corruption.

In many ways, the play is about self-censorship – whether it's OK to think those bad thoughts as long as you don't say them, and at what point do you stop biting your own tongue and call someone out.

My hope is that a wide audience sees this production – in a way it particularly needs to be seen by those it seeks to recreate onstage.

Come and see the play.

It should be fun. 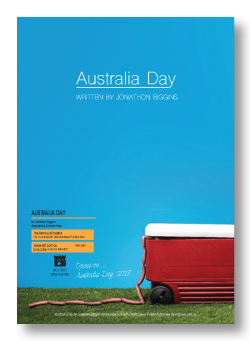