At The Peninsula Theatre

Elyot and Amanda, once married and now honeymooning with new spouses at the same hotel, meet by chance, reignite the old spark and impulsively elope. After days of being reunited, they again find their fiery romance alternating between passions of love and anger. Their aggrieved spouses appear and a roundelay of affiliations ensues as the women first stick together, then apart, and new partnerships are formed.

All the primary characters are from the upper crust of society, and should be able to be speak affluently and proper, perhaps even towards the side of snooty.

When the play begins, he is honeymooning at Deauville, France, with his second wife. Five years earlier, he had divorced Amanda, to whom he had been married for three tumultuous years, and then travelled around the world. When he sees Amanda again, he realizes that she is his true love. Together, they flee to Paris. Despite their bickering and fisticuffs, they remain reunited.

Elyot’s blond, attractive, twenty-three-year-old bride. Conventional, unimaginative, and innocent, she is Amanda’s antithesis and suggests the playwright’s dim view of the “nice” English girl. She implies to Elyot that she will tailor life to suit his whims.

Elyot’s first wife, newly married to Victor Prynne. She, too, is honeymooning at Deauville as the play opens. She is the most vivacious character in the work. She is not only beautiful but also spirited, independent, and unconventional—a fit partner for Elyot.

Stuffy and stodgy, he lacks a sense of humor. Like Sibyl, he is shocked by the elopement of Elyot and Amanda; when he and Sibyl catch up with the other couple, he chivalrously offers to divorce Amanda even though he deeply loves her. He wants to make over someone’s life and takes it upon himself to do so for his new wife. This drives her back into the arms of Elyot. Sibyl is his true soul mate, and their fierce quarrelling at the end of the play, mirroring the battles between Amanda and Elyot, indicates that the conventional Victor will end up paired with her.

Amanda’s French-speaking housekeeper. Makes a brief appearance in the second half of the show. Their inability to speak English and incomprehension of the bizarre occurrences in the apartment provide a number of laughs.

This is a brilliant comedy with glorious wit and dramatic precision. The script is set in France where each couple is honeymooning.

This play is funny and sophisticated with sparkling dialogue.  The cast and crew must be having fun and enjoying every moment. You need to be prepared to laugh at yourself, be in some unconventional scenes and enjoy -­‐enjoy -­‐enjoy JJ.

If you are interested in being involved in the production please contact Jan. We are looking for experienced people and people with capabilities and a passion to learn.

Audition information for other shows in 2019 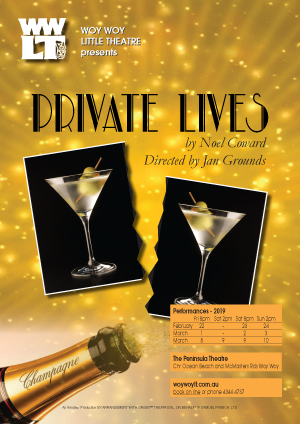